I stood waiting at the traffic lights with a few other humans, and I noticed her immediately: her posture, the recognisable signs of strength and gentleness. There are some very beautiful beings in this city, but this was enough for me to keep my eyes on her, as the traffic roared past us. She turned her head round toward me, and I saw the light in her blue eyes, and heard the melody of her voice in a concert of crystalline bells:

“You look worried, my friend, and you should not be,” said the Angel with a dazzling smile, “We know that not all is well in this world, but this is no different from all times,” she continued, as I looked at her face in awe. “Besides, there are some very good things happening, even if it is sometime difficult, for you, to recognise them. You should know that every time the Enemy scores one, We win two, sometime even three. So, please relax, and keep your faith in Her, for She won’t abandon you, however stupid you might be, most of the time.”

I was speechless. People walked around me. The lights had changed from red to green and back to red again. The Angel had gone, in a cloud of bells.

You raised your arms, the dove looks about to fly away. The world is at peace, your smile reassures all of us. The small flame vacillates, one short instant. The warm light plays in your hair. How we admire your face, the beautiful eyes that greet all of us.

For we are afraid, and seek your protection. The donkey looks at you, just to make sure you understood: your people need you.

A silent sweep above the early Summer moor, a flash of light, and she’s gone…

I felt the soft flutter, an angel flew by me, clueless mortal, accident of organic chemistry…

The stage was set long ago, where we have to admit our guilt, the betrayal of all that we believed in, when we were young.

That innocent person, that child, has grown into this: a pretentious liar, a coward, a traitor to what is fair and noble, an unctuous criminal.

The angel is waiting, the page is blank.

Not only tell, but write it.

It’s that, or the gun, lying on the table.

A clear choice: go to the light, or die the miserable death of the servants of the Enemy.

It is one of her recurring dreams: the angel stands, high on the edge of a cliff, at night. Herself, watching the angel, can feel the old scar burning, a real fire, not the sort of fake feeling, and she can still remember it in the morning. That, the burn, and the deep feeling of joy at the presence of the angel.

Today’s is a bright, frosty morning, perfect for writing. Sol, already near its zenith, is about to turn around the corner of the house, and for a couple hours the garden and my desk will be lit by the subdued colours of a clear winter sky. Small patches of frost-free grass appear along the hedge…

Characters and scenes are slowly falling into place, the novel has made more progress in the past two weeks than in the previous four months. The Angel helped a lot: one should never neglect one’s Angel. And I have been asking myself about this: if someone – deity, daemon or superior aliens (superior as in “wiser” than us and more experienced – “ancient” maybe) – is observing us, what do “they” see? What do they think of the way “we” persecute the weak, the poor, the lost, the other species – how we torture our world, incinerate cities, molest women and children, murder people with drones or other assassins, etc…? The liars of the politicians, the cowardice of the media, the greed of the powerful? What does it mean to “them”? How do “they” judge us, if at all? It may be that one day, a lovely winter day like this, we will get the answer we deserve to those questions. In the meantime is it right to make this a matter of fiction?

Turning the page, as this is only one of the many questions writers should ask themselves, I am simply happy the way things are going, as writing goes. A way was found to link the past to the present, actual or imagined, to marry reality to the dream, and the story feels the better for it – or at least I hope it will, to the readers. The books I have most admired are those that allow the reader some freedom of interpretation of one of the pivotal characters. For example in The Stand, Mother Abagail. She sees and never judges, and she appears powerless, and yet… In Snow Crash, Y.T., the kourier, Hiros’ not so secret love and guardian. So I have latched on one of those, and her character is developing well. There is a degree of ambiguity as to where her loyalty – or patience – lies, that is how long she’s prepared to witness the misbehaviour of the rest of us. The other characters are taking notice, fortunately for them and for the story, they will soon get out of themselves and their parochial prejudices, and see the light. So will I.

There is a lot of material to edit, some of which will be moved to the bin, as it should. How far am I to have a complete draft? Please note I did not write “first draft” since whatever there is has already been edited and rewritten at least twice! At this point I cannot predict, possibly till the summer, who knows! I am in no hurry to complete, but I want to make progress. The opposite is demotivating!

His shop is in one of the oldest streets in the city: uneven, ancient pebbles cover the ground, for him a difficult feat to negotiate every morning, as, in the small hours, he walks from his house to his work.

He too is very old, almost as old as one of the stones in the ancient buildings of the neighbourhood: and his craft is centuries – some say millennia – old: he makes the most beautiful and deadly swords, an art he’s received, as he was taught patiently over the years by his parents, as all his forebears.

They say the products of his labour have a soul: and they possess their owners, the few who are deemed worthy of such weapons, after all, it takes years of skilled craft to make one sword.

Today his latest customer is with him, standing tall, admiring his work: the katana he is now polishing reflects the light of this winter morning, and the flames of the furnace: the layers of fine steel glow in the semi darkness.

He knows this will be his ultimate masterpiece: the cycle of his years is coming to an end, but as she turns towards him, her smiling eyes penetrating deep into his soul, her red hair a halo, he knows the angel will be pleased with the result: a blade fit for a knight immortal. 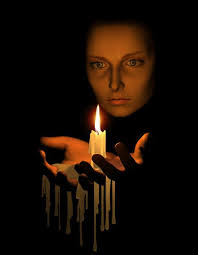 I’m searching for you

So close I can touch you

I want more, I want it all

I am lost, without you

I will face the legions of Hell

I will die on the cross

I will search for you to

The confines of the Universe