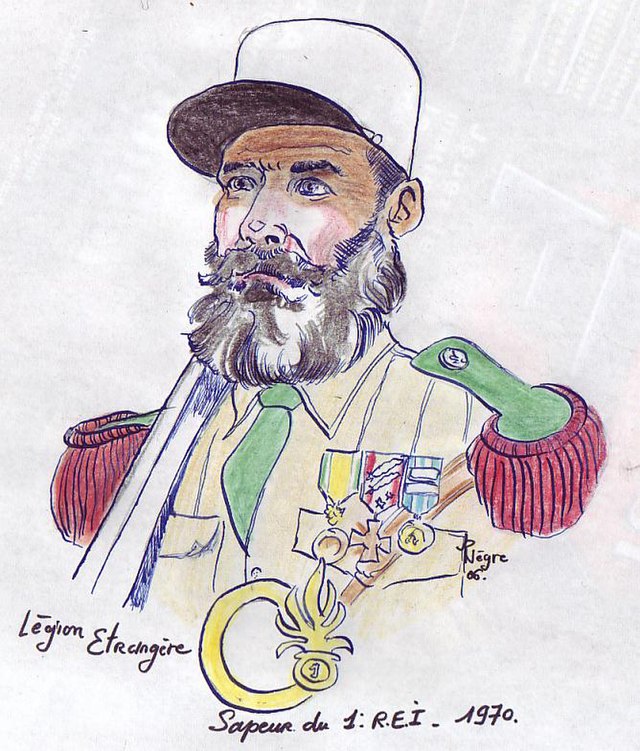 “The kepi (English pronunciation: /ˈkɛpiː/ or /ˈkeɪpiː/) is a cap with a flat circular top and a visor (American English) or peak (British English). Etymologically, the term is a loanword of the French képi, itself a re-spelled version of the Alemannic Käppi: a diminutive form of Kappe, meaning “cap”. In Europe, this headdress is most commonly associated with French military and police uniforms. In North America, it is usually associated with the United States Civil War, as it was worn by soldiers on both sides of the conflict…

The kepi was formerly the most common headgear in the French Army. Its predecessor originally appeared during the 1830s, in the course of the initial stages of the occupation of Algeria, as a series of various lightweight cane-framed cloth undress caps called casquette d’Afrique. These were intended as alternatives to the heavier, cloth-covered leather French Army shako. As a light and comfortable headdress, it was adopted by the metropolitan (French mainland) infantry regiments for service and daily wear, with the less practical shako being relegated to parade use. In 1852, a new soft cloth cap was introduced for campaign and off-duty. Called bonnet de police à visière, this was the first proper model of the kepi. The visor was generally squarish in shape and oversized and was referred to as bec de canard (duck bill). This kepi had no chinstrap (jugulaire). Subsequent designs reduced the size of the cap and introduced chinstraps and buttons. The kepi became well known outside France during the Crimean War and was subsequently adopted in various forms by a number of other armies (including the U.S. and Russian) during the 1860s and 1870s.

In 1870 when troops were mobilized for the Franco-Prussian War large numbers of soldiers either refused to wear the issued shakos or threw them away. The Emperor abolished the infantry shako for active service and replaced it with the kepi on 30 July 1870[1]

In 1876, a new model appeared with a rounded visor, as the squared visor drooped when wet and curled when drying. The model used in World War I was the 1886 pattern, which was a fuller shape incorporating air vents.

By 1900, the kepi had become the standard headdress of most French army units and (along with the red trousers of the period 1829-1914) a symbol of the French soldier. It appeared in full dress (with inner stiffening and ornamental plume or ball ornament) and service versions. Officers’ ranks were shown by gold or silver braiding on the kepi. The different branches were distinguished by the colours of the cap – see the table. Cavalry normally wore shakos or plumed helmets, reserving red kepis with light or dark blue bands for wear in barracks. General officers wore (and continue to wear) kepis with gold oak leaves embroidered around the band.

In 1914 most French soldiers wore their kepis to war. The highly visible colours were hidden by a blue grey cover, following the example of the Foreign Legion and other North African units who had long worn their kepis with white (or more recently khaki) covers in the field. With the adoption of sky-blue uniforms and steel Adrian helmets in 1915 to replace the conspicuous peace time uniforms worn during the early months of war, the kepi was generally replaced by folding forage caps. Officers, however, still wore kepis behind the lines.

Following the war the kepi was gradually reintroduced in the peacetime French army. The Foreign Legion resumed wearing it during the 1920s; initially in red and blue and then in 1939 with white covers on all occasions. The bulk of the French army readopted the kepi in the various traditional branch colours for off-duty wear during the 1930s. It had now become a straight sided and higher headdress than the traditional soft cap. This made it unsuitable for war time wear, and after 1940 it was seldom worn except by officers. An exception was the Foreign Legion who, previously just one of many units that wore the kepi, now adopted it as a symbol.”