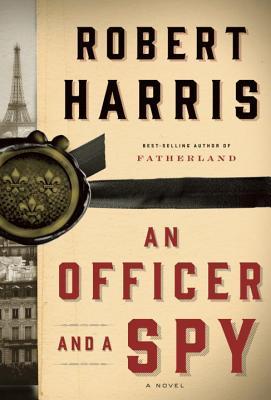 Marie Georges Picquart was a brilliant officer, and an honest man. Born in 1854 in Alsace (his family’s home was in Geudertheim near Strasbourg) he left the province with his widowed mother after the defeat of 1870. He became a brilliant officer, received the Legion d’Honneur for action in the Tonkin (North Indochina, now VietNam) and distinguished himself in North Africa, before joining the École Militaire in Paris as topography teacher. In 1894 he was involved in the margin of the military trial of captain Dreyfus, as observer for the then Minister for War, General Mercier. Dreyfus was accused of spying and providing secret military documents to the Germans. On behalf of Mercier Picquart handed over a “secret dossier” to the court president, which led to the conviction of Alfred Dreyfus and his deportation in atrocious conditions to Devil’s Island.
Here starts Robert Harris extraordinary novel, which follows Picquart step by step through the ordeal that was to follow. Whereas the main facts of the Dreyfus affair are well known, Harris’s meticulous research has led him to write a fascinating story of betrayal and courage, where the main actors of the drama are brought back to life in front of us. Picquart, after Dreyfus’s conviction, nominated (to his surprise) as the head of a shadowy section of Military Intelligence (Deuxième Bureau) largely responsible for the production of the dossier, becomes rapidly convinced that the court convicted the wrong man. France was then in a state of paranoia about a possible war with Germany (the new Reich had been declared in Versailles, in 1871, on the strength of the Prussian victory over France, which had led to the loss of Alsace and Lorraine), and French opinion was divided between antisemitic monarchists and extremists, and the partisans of the Republic. Picquart steadfastly investigated the making of the dossier, among his own staff and the departmental archives, and concluded not only Dreyfus’s innocence, but also the identity of the real culprit.
As with many other witnesses of injustice and lies through modern history, once Picquart had shared his findings with his superiors, he was pushed aside, posted to a dangerous mission, and ultimately, as he refused to give in, prosecuted and jailed. The reader is inevitably drawn to compare Picquart’s fate with other more recent cases of whistleblowers or witnesses, and I personally was prompted to remind myself of the circumstances of the death of Dr. David Kelly, defense expert and employee of the Ministry of Defense, who lost his life for treating the ignoble lies that were presented as the “WMD dossier” on Iraq as total rubbish. Picquart eventually succeeds in getting Dreyfus freed, although complete justice was never done. Dreyfus was pardoned (rather than fully rehabilitated), and Picquart reintegrated in the army. He would later become Minister of War in the Clemenceau’s cabinet (1906). He will die in active service, a brigadier general, a few months before world war I.
Harris’s description of Paris twenty years before the war, of the military caste of General Staff officers, their prejudices, their hatred of the Jews, and of Picquart’s quiet courage, is compelling. Curiously the author does not mention in his sources, that are comprehensive, the harrowing account of the Dreyfus affair by Hannah Arendt in her book “The Origins of Totalitarianism”.